Code to Kubernetes: Deployment shouldn’t be an afterthought

Earlier, developers simply wrote their program, built it, and ran it. Today, developers need to also think of the various ways of running it whether it be as a binary on a machine (virtual most likely), by packaging it into a container, by making that container a part of a bigger deployment (K8s) or by deploying it into a serverless environment or a service mesh. However, these deployment options are not part of the programming experience for a developer. The developer has to write code in a certain way to work well in a given execution environment, and removing this from the programming problem isn’t good.

Ballerina is an open-source programming language with a built-in cloud technology integration helps developers write their application just work in Kubernetes. Its compiler can be extended to read annotations defined in the source code and generate artifacts to deploy your code into different clouds. These artifacts can be Dockerfiles, Docker images, Kubernetes YAML files, or serverless functions. This session will demonstrate how you can move from code to cloud by using the built-in Kubernetes annotation support in Ballerina. 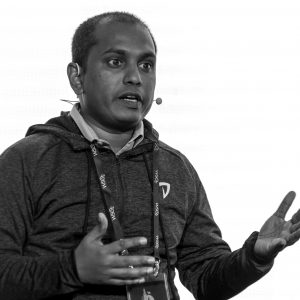 Lakmal Warusawithana is the Senior Director – Developer Relations of WSO2. Lakmal has a long history of working in open source, cloud, and DevOps technologies and has been Vice President of Apache Stratos PaaS Project. Lakmal is an architect for containerization and deployment orchestration of Ballerina, an open-source programming language for network distributed application. Lakmal has also presented at numerous events, including ApacheCon, CloudOpen, QCon, JaxLondon, Cloud Expo, Cloudstack Collaboration Conference, WSO2Con, KubeCon, ContainerCamp, DeveloperWeek, API Summit and many tech meetups.